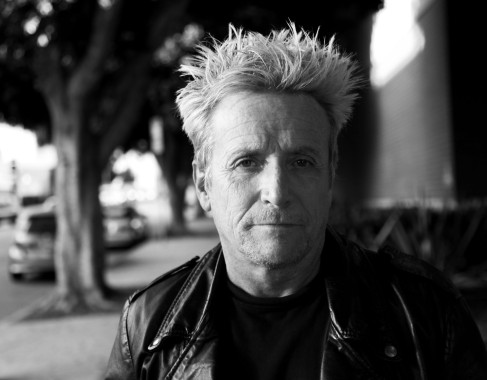 author patrick o’neil is currently in the process of writing his second book, chronicling his former career as roadie/road manager for several major punk bands during the ’80′s.

patrick: i’m writing the book i never thought i’d write. as a matter of fact, i shied from it for years, instead writing my memoir, which focuses on the end of almost two decades of heroin addiction. there was an urgency to that book, a need to tell the story, and a cathartic relief when it was done. yet, unlike that part of my life, which haunts me, the years i spent on the road, first as a roadie, then a road/tour manager for Dead Kennedys, Flipper, Subhumans, and TSOL, were years when the drugs were actually working. heroin quieted my internal negative voices, smoothed social anxiety, and solved the mystery of dealing with life (or not dealing with it). plus i got to be comatose for many of my waking hours, an endless dream of warmth and comfort (damn, when i describe it like that it almost sounds inviting enough to go back—only these days I know the reality of that desire).

now therein lies the dilemma: highly inebriated for most of that time, i remember the sensational and unusual events (there were many), yet for the most part the tour was endless road and hours of driving, so it all blended into one long, extended, dream-like landscape. unfortunately, as a result, there are huge gaps of time i can’t recall. i wrote this portion of my opening note regarding memory for my first book: “so take it from me, the adrenalin rush of an armed robbery, your best friend being murdered, a narcaine injection bringing you back from the dead for the seventh time, the click of handcuffs, or the slam of a cell door—these are moments i’ll never forget, no matter how hard I try.”

but, though i was assaulted, stabbed, involved in numerous altercations, engaged in an obscene glut of meaningless sex, OD’ed twice, arrested once, angry, depressed, dejected, and at times supremely happy—there were still great swaths of time and events i just couldn’t remember, and i was leery of trying. so as i said, at first this project was very daunting. i really didn’t want to be another unreliable narrator like david carr, in his addiction-fueled memoir The Night of the Gun. carr was able to exploit his inability to remember, and he did it well. it felt to me like this had already been done. but then, every time i told tour war stories, the usual questions was: when are you going to write the book?

luckily i was able to contact friends, family, and members of the bands and road crews (those who are still alive) and they were able to fill in the gaps. i began taking notes: my ex told me of a visit to the ER in a texas hospital, a show promoter provided the timeline of our van breaking down and getting stuck for three days in the backwoods of arkansas, and a lot of important details that were lost to me, i could research on the internet. as i slowly started writing down the details, i realized it wasn’t going to be that difficult.

memory and the mind are a densely convoluted warren of wormholes, and when i actually sat down and started writing, it all came rushing back—well, to be honest, it didn’t really rush; i’ve been working on it now for over two years. instead of fighting it, i realized that the endless sequence of events, one blurring into the next, was actually the essence of being on tour. there were mornings on the road when i’d wake up, light a cigarette, and chug the flat beer sitting next to me, wondering what city i was in and how long before the next show. this left me with the question, how can I convey to the reader this sense of freedom, monotony, confusion, and insanity?

“i was a strung out drug addict let loose on america, traveling the highways, ODing in motels. causing mayhem and disorder in every city and club that crossed my path—it was a beautiful thing to behold.”

eventually, i just went with the first memories that came. i wrote them as chapters, different tours, different years, different crews and bands.  somewhere around a hundred pages in, i remembered anne lamott’s Bird by Bird, (a book that inspired me to be a better writer many years ago). her dad’s instructions to her brother, who was having trouble writing a report for school on birds was to “just take it bird by bird.” so i started writing from the beginning, in chronological order: first show, first tour… and when i wrote of an event, i remembered details that lead to the next, and slowly it began to materialize. once my mind agreed to remember, i was slammed at odd times, recalling a moment or two. i always carry a notebook and pen. show by show, tour by tour, this book is coming together, one memory at a time.